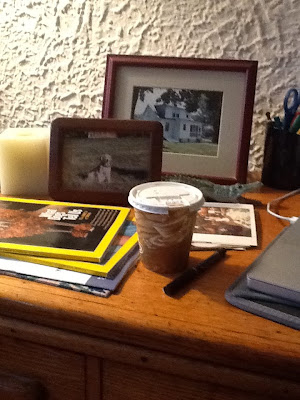 All three of the kind souls who read this blog have most likely already seen all my photos on Facebook, so I'm not going to post them again here. Some of them are kind of ugly anyway. But today is different. I took this photo of my desk after reading that today's topic was "Makes Me Happy." I immediately looked up an thought to myself, "Why, this Tibetan butter tea makes me happy, I think I'll take a picture of that!" And as I prepared to do so I realized that it was sitting amidst a bunch of other things that also make me sublimely happy...

National Geographic - If you know me at all, you know I love animals and nature and words and pretty pictures, and also that I am a nerd and obsessed with my own idyllic childhood. Therefore National Geographic is one of my favorite things in the entire world. I've subscribed to it since I was perhaps 10, thanks to my encouraging parents, and I look forward to it every month. Even though I can now read it on my iPad as well, there's some sort of magic about that yellow rectangle promising hundreds of beautiful pages within that just can't be replaced.

Butter tea - Have you ever had Tibetan food? Unless you are my neighbor and have tried Cafe Tibet, I'm guessing the answer is no. If you ever have the chance to, however, I recommend the momo and/or sha baklap dumplings, and lots and lots of butter tea. Mmm... There is nothing like this hot, salty, savory drink to get rid of your chills. Apparently in Tibet it's actually made with yak butter, but due to the limited population of yaks in Brooklyn, this is less than authentic... But delicious nonetheless.

Black pen - My mother got me addicted to the Pilot Precise V5 rolling ball pens when I was just a kid. They bleed easily, though, so I've stained many shirts, sheets, purses, and carpets by leaving them uncapped thoughout my life. It's worth the risk though. One day I made the switch from Fine to Extra Fine and never went back. They are the only pens I will ever use, as they facilitate my cursive handwriting rather gracefully...

Postcards - I was trying really hard for the first week of February to mail postcards to friends and family as another kind of challenge, and I did okay for a little while. I've fallen behind, even after I bought some weird Wild West-themed cards, but luckily I just unearthed some beautiful ones I bought in Ireland, so I'm motivated all over again. I also finally decided who is going to receive the postcard of "The Peaceable Kingdom," so that makes me sublimely happy. I had to save it for someone who was a serious animal lover. She will be quite pleased, I think...

My Computer - I got this MacBook for my 21st birthday. It needs some serious work and I worry that its days are numbered. Is it possible to feel affection for a piece of technology? Apparently so. That's all for now, I don't want to jinx it...

Sir Reginald le Crocodile - I found good old Reggie in high school after he was discarded by some uncaring child, took him home with me, and promptly scared the hell out of my cat with his ridiculous squeaking. He has traveled across the country with me on the dashboard of my car and lived with me in many apartments throughout my college years. He's been in Brooklyn ever since and spent the last few years keeping watch from atop my TV, until we cancelled cable and packed it away. Now he hangs out with me every day and helps me write. He's a rather dedicated little reptile...

Photo of Baby - I guess because I grew up an only child, my little dog Baby features more heavily in my memories of childhood than any other creature in the world. I will most likely never get over her loss and I'm certain that no dog will ever come close to replacing her. This photo was taken by my dad just a few days before we had to put her down and in it, you can see my shadow as I stand just outside of the frame. I was never too far from her in her last days. I think she looks rather noble and accepting of her fate, even though it came too soon. I'm glad I could be with her when she left this world.

Photo of Mema's house - Another photo taken by my dad is of my great-grandmother's house. The view from the back was the one we all knew the best, and he must have been standing right near where there used to be a few wooden swings hanging from the limb of a maple tree. It's a view I remember well. Pearl was 99 when she passed away and she left a long legacy of kindness and goodness and beauty and warmth that continues to inspire her family and anyone who knew her. I can never eat an apple pie without comparing it to Mema's... They're just never as good.

Much like all the trinkets on my desk at work, I guess it's the little things in life that make me happy...
Posted by Queen Anne at 6:29 PM

I don't think I ever knew that you called your great grandma Mema too!