Walking down the same street nearly every day, I have come to appreciate its subtleties. I will likely never hang out on this street, never stop in one of its establishments. It doesn't seem to have any bars or restaurants I'll ever frequent and I don't think there is even a place for me to grab a cup of coffee. I simply pass by. Although I traverse just one block of White Street between Broadway and Church on my morning walk, there are things I have come to expect. 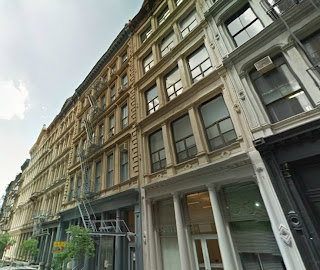 When I turn onto this street, I immediately look into the side window of a Chinese business on Broadway that sells paper supplies and decorations in fabulous shades of red and pink and gold. Across the street there is always an endless supply of rugged yet creative types in work boots and stocking caps, hauling film-making equipment on and off of trucks of all sizes. Further on, a grocery truck can be found pulled onto the south curb with little room to pass, its drivers rather friendly to female passerby as they unloads their wares. Just below Franklin Place, construction workers converge beneath scaffolding, their conversations shifting between English, Polish, and Spanish but their cigarette smoke smelling all the same. With their blue and yellow umbrellas folded, hot dog carts are rolled up the middle of the street towards Broadway by their bearded owners wearing taqiyahs. The sloping architecture of the Synagogue for the Arts shelters children's playthings and discarded pamphlets in its courtyard. Young men with assymetrical haircuts and young women in tights and big scarves, their clacking heels telling me a block in advance that they will ascend the stairs to the Flea Theater. The glowing charisma of Let There Be Neon that beckons with a lounging, hot pink feminine outline reminiscent of gritty, windowless, male-only establishments.

This morning the street was strangely quiet, as many New York streets tend to be when it rains. Everyone is just in a hurry to get inside and they scurry about with their umbrellas up and their heads down. But the rain wasn't falling in those few minutes I walked on White Street today. The air was uncannily warm for January, muggy and thick and seeming able to absorb any noise that might emanate from the street, and yet, none did. No one spoke. No carts rolled. No heels clacked. The street was suddenly, inexplicably, utterly unfamiliar to me and I felt a bit lost. I looked up at the soaring lofts with their zig-zagging fire escapes and wondered, "Who lives there? What goes on in those buildings?" It seemed I saw the retro yellow ARC sign for the first time and finally acknowledged that it was a record shop. I wondered to myself who thought that synagogue architecture was a good idea and thought perhaps I should look up the Flea Theater and see what was playing.

It baffles me that a street you think you know so well that it has taken on mundane qualities can suddenly become strange and mysterious just because of a slight change in weather. The light casts new shadows and the air feels strange in your lungs. You see something new and different in things you've seen a million times and you realize that you will never know everything about this city. No matter what you think you know, you realize, you are still a stranger. You are still alone. And yet somehow, you are perfectly at home.
Posted by Queen Anne at 10:15 AM