I don't know why North Carolina is called North Cackalacky, but my friends who live there seem to refer to is as such. Southerners are weird... but they are also very hospitable and live in a lovely climate, so I'm glad to be going to good old North Cackalacky for Easter! Tomorrow I'll fly out of LGA to get to Raleigh by about 3:00 p.m., where I'll meet my mother and sister, settle into our hotel, and have a lovely dinner with my parents' good friend Nan, then visit with their other good friend Vince and his sister Peggy. I guess on Easter Sunday we'll drive up to Maryland, and then Monday I'm back in New York. A whirlwind of an Easter vacation, but I'm okay with that. My parents are pretty cool people, and I think their friends are great.

I was raised by parents who surrounded themselves with an eclectic crowd of folks... Musicians and artists and teachers and nurses and massage therapists and librarians... and then those who never really had a set career but just kind of floated through life taking the next job or opportunity that came to them. One of these is Vince, who for the better part of each year now travels around the country in the VinVan, camping in national parks and visiting Rainbow Gatherings. Occasionally he shaves his bushy red beard and gets a job working for The Man... And then he somehow ends up in a fancy hotel in New York City doing some sort of consulting thing I'm not really clear about, and then Nick and I go out to have Indian food with him in Midtown. Weird. I've known Vince my whole entire life and think he's pretty damn awesome.

Nan (real name Nancy), I have also known for just about forever, and again, I'm not really sure what she's done for a living all these years, though she's retired now. She has always been an artist and photographer, and I remember for a while she was a teacher's assistant and shared hilarious stories about the crazy names the inner city children were cursed with (like Iska...pronounced Isaac. Lord.) In fact, when she moved out of her country house when I was in middle school, she gave me a bunch of old issues of National Geographic, which started my collection and which I still have. She always seemed so hip and otherworldly to me, like the coolest grandma in the world, only a child at heart... She has this short white hair and wears crazy glasses and funky earrings and is always working on some sort of art project or is taking beautiful pictures. Featured here is a picture of my dad that she must have taken in the '80s... He's looking r 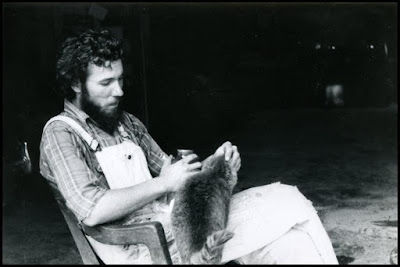 emarkably like a hipster with his bushy beard and his overalls, but he was the real deal -- hippie redneck to the max. Anyway, I haven't seen Nan in about 3 or 4 years, and she's really a lovely person with a lovely daughter and a nice little grandson who I guess is probably a teenager now, but who I will always remember as a goofy, brainy little 8 year old. It will be nice to reconnect...

Part of the reason we're going down is to visit Nan, and part is because Vince's sister has cancer and doesn't have a whole lot of time left. My mother adores Peggy, so of course she wanted to spend some time with her. Peggy is a lovely person who has raised a bunch of kids and foster kids and grandkids, and who, when we spent Thanksgiving with her when I was 9, introduced me to "Gone With the Wind," and experience which I will never forget. I guess she's a true Southerner, which I can only pretend to be... Anyway, Peggy has this fiery red hair and penciled in eyebrows and the most pleasant accent I've ever heard in my life. The last time I saw her, I was home for the weekend and I proudly cooked up the best homemade brunch ever for my parents and all their friends -- I'm glad I could share my limited cooking skills with Peggy by making some damn fine eggs Benedict. I hope I'll get to see her at least a few more times after this...

While this will be a very non-traditional Easter, because I can't imagine in a million years that we'll set foot in a church or have an Easter egg hunt or even mention the words "rose from the dead," it will be absolutely wonderful to reconnect with the people who I really feel had a great impact on me during my childhood years and who I am lucky to still know as an adult. Growing up, I always thought of my parents' friends as my friends, too... Since I was an only child who had few friends to drag around with me, and very few of them had children, I did a lot of hanging out with the old folks. Sure I got lucky at many parties and got to run off with any kids who happened to turn up, or I got sick of the adults eventually and yelled at them to turn their music down once I decided it was time for me to go to bed... But for the most part, I was able to talk and eat weird food and it didn't really bother me. I really appreciated the people I was surrounded with growing up and I don't really remember there being any awkward transition between childhood and adulthood, though I'm sure there was. I sat around tables listening to crazy conversations and on porches hearing beautiful live music as a child, as a teenager, and now as an adult, and though the faces occasionally drifted in and out and sometimes I had friends around to share it with, not much changed.

I suppose people have changed quite a bit (and so have I), I just haven't been around much to see it. I've left home for good and I'm not turning back, but still... it's good to reconnect and acknowledge your roots. You can't forget where you come from or the people who made you who you are, especially when those people are pretty damn cool.
Posted by Queen Anne at 2:17 PM

Wow, what a fantastic picture.